Team Foundation Server for everyone, everywhere…

The topic I chose to present for this round of Dev4Devs Cape Town was (you guessed it) TFS.
This time I took a different approach and showed off the “new” focus that Microsoft has started adopting. Instead of trying to convert everybody to the Microsoft way of doing things, Microsoft is starting to adopt the desperate development realms and in some cases, is actually supporting them! This is very exciting for everyone using very competent, often “lower cost to entry” development tools and technologies, providing capability to grow which was previously unrealised.

So without further delay – here is a brief overview of my presentation: TFS for everyone, everywhere

Anyone who has worked with TFS should be familiar with Team Explorer. This is the developers portal into “the belly of the beast, erm TFS”. 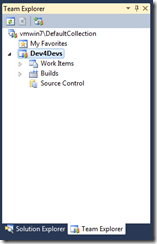 Maybe a little less known to the Java, and especially the Eclipse developers would be a product  by the name of Team Explorer Everywhere (TEE).
This is (amongst others) an Eclipse plugin which is basically Team Explorer for the “non-Microsoft” orientated. It introduces TFS to the Windows, Linux, Mac, Solaris, AIX and HP-UX users (see here under system requirements for the “official” list of supported IDE’s and OS’s). 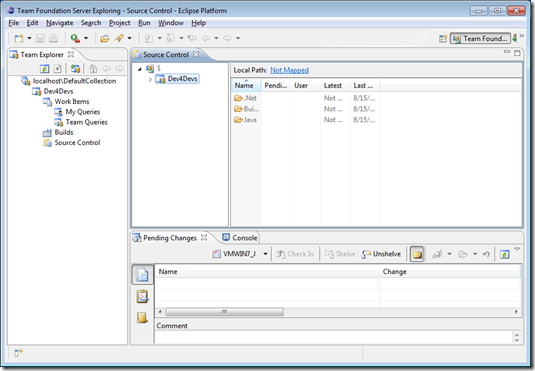 As would be expected there are a few minor differences between the two, but by far any Visual Studio / Team Explorer user will feel right at home using and configuring TEE, right down to the check in dialog and policies.

OK, so now you have TFS integration into Visual Studio and Eclipse. What about the extensive .NET API (that is installed with Team Explorer)?

No Problem! Microsoft has released a TFS Java SDK.

Looking at a .NET example to create a work item in TFS:

2) Establish a connection to the appropriate TFS Project Collection

3) Using a Service Locator pattern we can get “services” from the project collection. In this case we are interested in the WorkItemStore. This is basically a repository for work items and can be used to load and query work items

6) And finally, based on an active record pattern, we simple save the newly created work item

So looking at the Java SDK, how difficult will it be?

2) Create a connection to the team project collection

3) Get the work item client (instead of store…)

So, save a few nuances, pretty much the same when it comes to the interface exposed by the .NET and Java object models.

As mentioned earlier, I can’t wait to see where all this leads to in the adoption of TFS as a decent (and more often than not, cheaper) ALM suit.
Team Foundation Server…. not just your average version control

Anyone that has been following Brian Harry over the last number of weeks would have started seeing what is in the pipeline for Team Foundation Server vNext.

As he posts about the new features, I’m getting more and more exited about the way that Microsoft is busy closing the gap between TFS and the products that TFS is usually compared to. I find that there is still a very narrow vision of finding a single feature, and then if the system you are comparing against does not support this feature as expected, it is discounted (sometimes aggressively).

Things are changing though…

One of the new features that would make a lot of SVN users very happy is the introduction of local workspaces. This is a particularly big deal as a lot of people seem to have problems with working in “offline” scenarios.

Another contentious issue has always been the rollback ability within TFS source control. A large number of people may not have known this, but rollbacks in TFS have actually been possible for a while now. Granted a bit of a hassle as a “true” rollback was only possible via command line.
Well not any more. According to Brian, the next version of the TFS Power Tools will be bringing forward the Rollback “UI” from the next release.

Considering how TFS as a product is maturing while taking the community into consideration, I must admit that making a decision to take the passion I have for TFS, building a business around it while sharing it with the world, was probably the best thing I could have done.
After all, who would have ever expected a Microsoft supported “cross platform” Java based environment and API for TFS to appear?

I can’t wait to see what is coming next!

BTW: If you are considering upgrading to Visual Studio 2010 or TFS 2010, please do evaluate your Software Assurance options…

I’ve been a long-time fan of all the authors and was quite exited when I heard that they were busy writing this book. So when it was finally available in this country I snatched one up and started reading.

Barring the fact that I think there are some questionable statements, I found the book to be tedious at times as it starts out with a high level overview and then drills down into more detail in subsequent chapters.  I think the layout of the book is well suited as a reference book, looking up sections as and when you need to find information on certain topics.

The book did bring some insight into areas that I was previously not so familiar with, and it is evident that the authors are well versed in TFS. One thing that I found interesting was the guidance on how to do “Planning and Deployment”. This is obviously very helpful when you’re doing this as a business or just wanting to adopt internally.