Oracle developers should be well versed with JDeveloper.
On the SQL side of things, Oracle actually has a plugin available for Visual Studio "Oracle Developer Tools for Visual Studio" giving you a very similar experience to the SQL Server Data Tools.
JDeveloper on the other has is "a freeware IDE supplied by Oracle Corporation. It offers features for development in Java, XML, SQL and PL/SQL, HTML, JavaScript, BPEL and PHP".

This should not stop you from using it with TFS though…
The only thing that intrigues me is the use of workspaces to establish the connection as apposed to creating a connection directly to TFS.

TFS is no longer "just" a Microsoft / .Net tool… To prove it, have a look at http://java.visualstudio.com.

I have been doing a number of upgrades over the last couple of months and have found that doing a migration to a test/dev environment is a good way to gauge the downtime needed to perform an upgrade on the TFS Collection databases.

This works well if you have a spare set of servers / VM's lying around and you are able to do a full migration. I have been in a situation where a new application tier was not much of a problem, but they had an enterprise SQL server setup that we "had to" use.
Even though the "duplicating" of the collection databases is no problem at all, the tfs_configuration database is a different story.

To perform option 2,  simply create a backup of the tfs_configuration database and restore under a different name (on the same server). When you perform an upgrade or (re)configure the TFS application tier you have the option to select the "correct" config database: 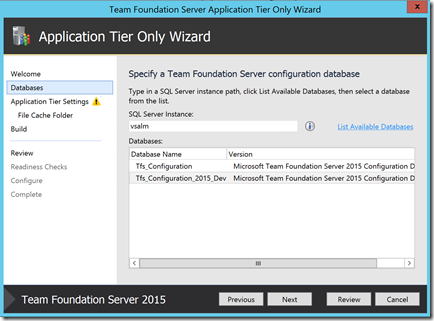 If TFS is already configured and you want to change the database after the fact you can follow these steps:

That should have TFS pointing to the new config database, meaning you can have multiple TFS instances using different configuration database hosted on the same SQL server.

Need help upgrading ? : give us a shout

I can hardly believe we are heading towards the end of the year.
With this brings the time for our final event this year on the 19th of November.

This time we are going to have a look at how TFS is opening up to everyone/everything around it, both in terms of functionality and flexibility.
We will briefly explore how TFS is opening up its doors to embrace extensibility and 3rd party systems, platforms and languages a like.
We will then delve into how we can manage technical debt with TFS and SonarQube.
If time permits, we will see some of the new features (yes even more) in the pipeline (TFS 2015 Update 1 is already in RC and there are some really cool features bundled in this update!).

Hope to see you all there !

Presented by Team Foundation Consulting
Thanks to Microsoft for sponsoring the venue.