Getting annoyed when working in Visual Studio 2017 and each time you you open a work item from Team Explorer pane, it opens it in the web?

Well according to recent conversations I have had, it appears that not to many people know about the ability to set the behaviour.

By default, VS2017 will open the work items in the browser, but there is a way to change it. When you open Visual Studio and select the Tools > Options from the menu. Find the "Work Items" section and under General you can change the behaviour. 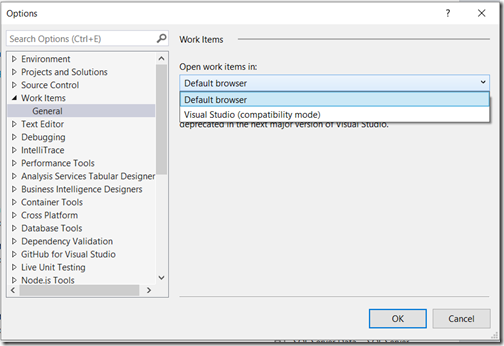 Be warned though, this is option is due to be removed in the next major release of Visual Studio where the default behaviour will be to open the work item in the browser. So use it while you can

woohoo.. finally the RTM date for Team Foundation Server 2015 and Visual Studio 2015 has been made public…

Edit: Visual Studio will be released, but Brian has decided that quality is more important than timelines.. So we will have to wait a bit longer for TFS 2015 to land, but be assured the quality will be right up there

Need help upgrading ? : give us a shout

As expected there is a bunch of stuff being announced at //BUILD/.

For those of you who do not know, Microsoft released TFS 2013 update 4 with their Connect(); event yesterday/last night.

Some of the really cool stuff that I have been waiting for is the introduction of the Stakeholder licensing and Trend charts.

They also gave us a sneak peak of what is in the pipeline, and I for one am once again getting really excited.

One thing that caught my eye was some vNext features, for example the new build infrastructure that is going to be introduced. YES the build agent is finally going cross platform…
As per Brian Harry's post:

I (Brian Harry) showed a preview of a major update to the VS Online/TFS build service that we’ve been working on.  We believe it will address a large portion of the suggestions to improve it that we’ve received.  Improvements include:

I have dealt with a couple of clients recently who were very keen to get into the GIT repo's that are available in TFS 2013. The unfortunate truth is that GIT is not the "same" as the widely used TFS Version Control (TFSVC), SVN, VSS source control systems. Some teams tend to have a problem with this and, after numerous missing changes/files and problems with branching, commit vs pushing and merging issues, will inevitably ask : "How do we go back to what we know?".

There are tools to move from VSS & SVN to TFSVC and there are instructions to move from TFVC to GIT, but what about GIT to TFSVC? Well luckily, for a simple migration, you do not need any commercial or "3rd party" tools.

You do need to get your hand on GIT-TF and optionally the git client, and you are "a" for away.

3) Finally check in the changes

The stakeholder access has been mentioned a couple of times here and here by Brian Harry.

If you recall correctly the Limited access group means that if you are in that group, you do not need a CAL to access TFS Web Access. It also meant that you can only see a very scaled down version of web front end which basically  gave you access to the work items that you created. 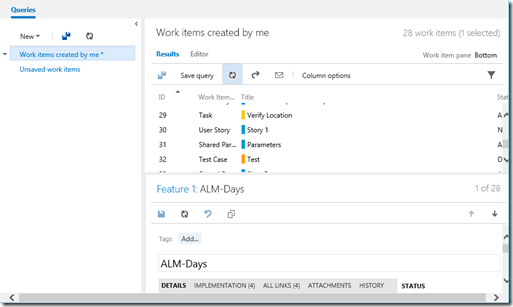 Things have changed.. Now you have power!
Instead of the previous "Limited Access" group, there is now a Stakeholder group.
The allowed features have gone from "View My Work Items" to :

Where TFS has  been hiding in the developer realm within corporates, this move IMHO opens up TFS to adoption in big business, where getting everyone on board from a licensing perspective can be a huge expense.

Don't get me wrong, trend charts and pull requests in TFS 2013.4 CTP 1 are big, but you can have all the charts in the world, if the bar to entry for the stakeholder is too high, it is not going to give you the benefit that you need.
I can't wait until the CTP2 when the Stakeholder licensing is suppose to be finalised!

A while ago I did a comparison between TFS and Rational Team Concert.
It came up in a discussion amongst the ALM Rangers and I posted it here for information purposes.


This is a very high level and brief overview, if you have any comments corrections or additional information, feel free to give me a shout.

The interesting thing here is that the Professional subscription actually includes a "rented" version of VS Professional for the duration of the subscription. The downside is that you can only have up to 10 pro users on your account.

For an overview go and look here: http://www.visualstudio.com/products/visual-studio-online-overview-vs

The TFS Build environment can be a bit complex with a couple of things playing on each other. Let's see how everything fits together.

Let's start with the basic build… When you install TFS, and you "Configure Build" using the TFS Admin console, you are in fact setting up 3 components. The build service, controller and as many agents as you may need.

The build service is a communication mechanism between TFS and the build components. You need to have a service running on every build machine, whether or not that machine only has agents or contains a build controller and agents. The controller (as its name implies) controls the agents and manages which builds are being handed off to which agents. Finally, the agents preform the work.

The controller and or the agents can run on separate machines. So you could have an instance where TFS in on Serv1, the controller and potentially one agent is on Serv2 and another 2 agents are on Serv3. One thing to note is that a TFS Project Collection can have multiple controllers associated to it, but a controller can only service one project collection.  You can also only have one controller installed on a machine.

You may also be tempted to have multiple controllers to a team project collection, but in most cases you should only require one controller and then a number of agents spread across multiple machines.

Lab Management brings with it a bunch of additional resources and components. More specifically it has its own Test Controller and Test Agents.
You would use test controllers and agents when you want to "run tests remotely, distribute tests across multiple machines or run load tests".

Unlike the test agents in the previous section, you would only have a single test agent deployed on a machine. These components form part of the BDT (Build, Deploy and Test) workflow.

The new kid on the block, Release Management, leverages the default build to obtain compiled artefacts. In fact it has a custom build template that actually instantiates a release pipeline in Release Management.

So to recap, TFS has the primary build (Team Build) infrastructure that consist of a build controller and build agents. This is used to compile and do initial tests on the code that is in version control. Then Lab Management with its test controllers and test agents takes this a step further and allows some deployment workflows and once again adds test capabilities.

Finally, the time has come for us to launch the first ALM days in South Africa.

Team Foundation Consulting will be launching ALM days in Cape Town in January 2014!

Learn about updates to Microsoft’s Application Lifecycle Management offerings which will enable your software development teams to be more productive and to collaborate more effectively.

This event provides insight, advice, strategies and techniques to improve quality and ensure the final application meets the needs and expectations of users.

The event is free and seats are limited.
Date, venue and agenda to be confirmed soon.

If you are interested, sign up on www.alm-days.co.za and be first to be notified once all the details have been finalised.

We look forward to you joining us for a day focussed on Application Lifecycle Management.

I have been an avid consumer of the ALM Rangers artifacts, articles and applications for a long time now.

Who are the Rangers:

“The Visual Studio ALM Rangers accelerate the adoption of Visual Studio with out-of-band solutions for feature gaps and value-add guidance for the ALM community.”

Some of the cool “stuff” that you should have seen before:

What happened to the TFS 2013 Build Templates?

I have had a couple people asking me “where are the build templates in TFS 2013?”.

Well they have been removed!
Don’t worry, they are still available though

By default, they are now simply stored in TFS and not in the repository.

When creating a build definition you will notice that the default build templates can simply be selected (as per usual).

When you need to use a custom template, or modify the existing templates you can simple download the template,

make your changes and then upload the updated build template to the repository as per normal. 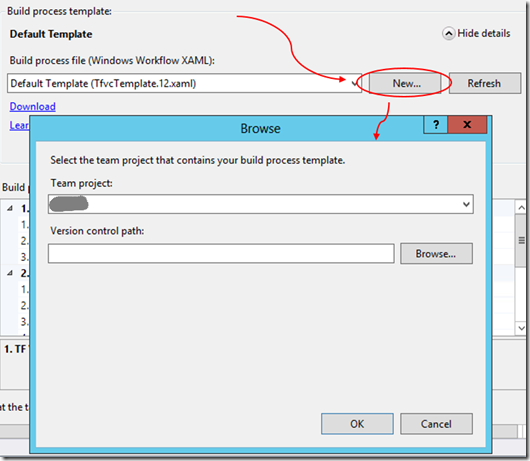 Microsoft has reworked things in the build templates, simplifying it quite a lot. Hopefully altering your build processes will no longer be such a daunting task!