The second round of Dev4Devs 2011 is coming around…
I really enjoy this type of community “event” that brings together a bunch of like-minded individuals to interact and discuss what is happening in their area and industry as a whole.

Go here to find out more.

I had some “issues” getting the video recorder collectors working on Widows 2008 R2 Server recently.

The link provided is not really of much use, it merely tells you to install the Expression 4 encoder. This in its self is not going to give you much joy, so here are the steps in a bit more detail: 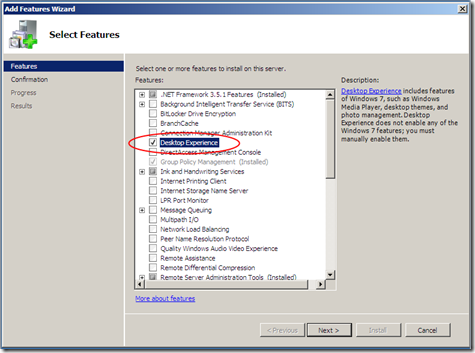 Download and install the Expression 4 (SP1) encoder.  Note that the new Encoder is now included in Visual Studio SP1.

From here on it is as simple as ensuring the your configuration has the video recorder adapter enabled.
Open up Test Manager, select “Plan” and then select the “Properties” tab. 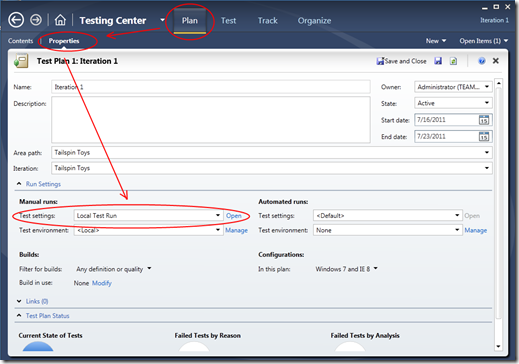 In the properties select the appropriate test settings and select “Open”. 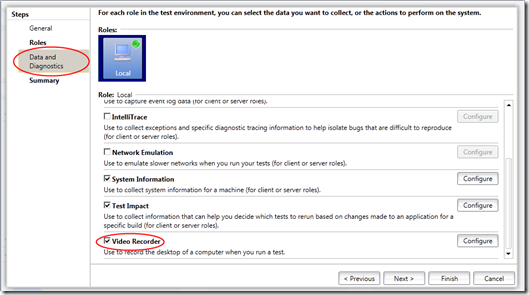 When speaking to potential clients, I more often than not end up needing to explain to them that all the issues and problems they are highlighting often derive from TFS 2008, or more so, TFS 2005.  In my business I find that I still deal with a lot of misconceptions around TFS as a product and what it provides. The result is that I end up needing to “re-sell” clients on TFS.

Dealing with such a legacy is a hotly contested market space and obviously a big hindrance to any business. So in an attempt to correct some perceptions I’ll endeavour to address some misconceptions around TFS 2010, specifically comparing TFS 2010 against TFS 2005 & TFS 2008.

To start off with, a real common one….

In years gone by the licensing structure of Visual Studio 2005 & 2008 merely included a TFS CAL ($499) in the MSDN subscription. You still had to purchase a TFS server license for about $2800.
In 2010 you still have the CAL included in the MSDN subscription, BUT you now also get a TFS 2010 server license included!
You can however still buy a retail copy of TFS 2010, it will only set you back $499 allowing 5 named users without the need for additional CAL’s (going over this number you will have to purchase CAL’s for each user though).

So… if you purchased Visual Studio 2010 with MSDN for each developer, you are ALREADY licensed for TFS 2010.

Due to the fact that TFS 2010 comes with a restricted usage SQL 2008 license (or in fact can run on SQL 2008 Express) and WSS3 or SharePoint Foundation is free, you can have a fully functioning TFS 2010 environment up and running without coming close to the capital expenditure of its predecessors!

The next thing that people always go on about is “but svn/git/mercurial is free”. Yes they are free, BUT they are merely version control products (and yes some of them are pretty good ones at that).
TFS has a version control component to it, BUT it also incorporates and integrates a large number of other features, to mention a few:

“But…” you say, “there are a bunch of other tools that can perform these tasks”. “Yes“ I say “there are”, but are they seamlessly integrated to give a single view across all the functions in the development sphere? Do they give you the ability to interrogate the progress, activity, quality or performance of your team in detail? Are they integrated into your “day-to-day” environments making them a natural part of your environment?

If you have not yet considered TFS 2010 due to cost, please take some time and get the facts (or speak to me

You may be surprised!