Windows joining in the containerization fun

So in the previous posts getting started, creating an application and configuring the container we saw how to install docker, create a sample application and deploy it and run it in a docker container.

Thus far the containers where a Linux flavor and believe it or not, we were running a dotnet application on it.

With Windows 10 (1511 November update or later) and  Windows Server 2016  and Docker Beta 26 or newer, it is possible to create windows containers. 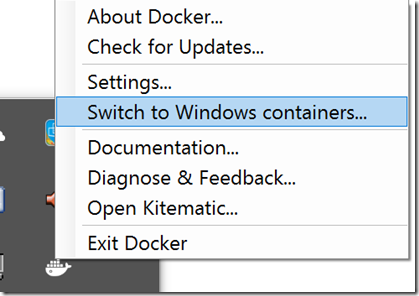 Wait for it to complete.

Once it was switched over, then go back to the application that we created in <<link>> and edit the dockerfile.

Then, as before, run the following commands:

The simply navigate to http://localhost/ and voila!! you are not running your same application in a windows based container!

If you are skeptical about what platforms etc. you are running on, download this sample and edit the dockerfile and go to the “Docker” tab

As much fun as this is, the goal behind using containers is not to simply play with it on your machine. We want to automate the creation and deployment of the containers.

Next up I will show you how to automatically use VSTS to build and deploy to an Azure  Container host.